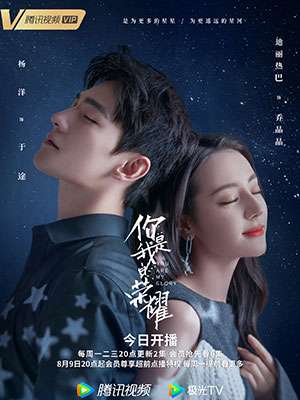 Where to Watch You Are My Glory

It tells the story of the popular actress "Qiao Jingjing" and the unrequited love student "Yu Tu" in high school. After a ten-year absence, they reunite on the Internet, and then start a romantic and healing journey of warm love.

Ten years later, Qiao Jingjing's unexpected starlight gleamed, while her male god who has rejected her in high school seems to have disappeared.

Time flies, they have not seen each other for ten years. Or that is not right. In fact, he can see her everywhere, in various news media, screens of various sizes, even subway advertisements, bus stop signs, and she is everywhere.

Looking at the woman who was smiling at him not far away, Yu Tu couldn't help feeling in a trance - he probably encountered an adventure.

Qiao Jingjing was also looking at Yu Tu, she thought, there is a saying, very popular, how to say it? Oh, it seems to be - Despite years of striving, you return with a young heart.

She was rushing to fame and fortune amidst the billowing dust, while this man, as always, had clear eyes.