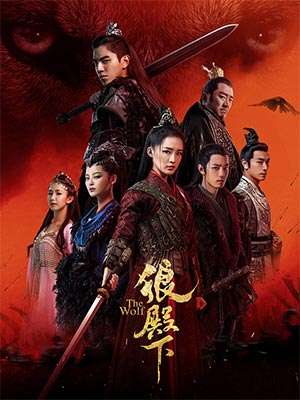 The two countries Jin and Yang are in opposition to each other, good and evil. King Yang, Chu Kui, was on a war spree and the war was raging. The loyal King Jin, failed to resist Chu Kui, so he retreated to the north and raised his troops to wait for the day to attack the enemy.

The wise and kind-hearted Ma Zhaixing befriended a wild boy on Wolf Hunting Mountain and named him Wolf Boy. The wolf boy has grown up in the mountains and forests since childhood. Although uncultured, he has a simple nature and a pure heart. Unexpectedly, on order to save the wolf cub, he was misunderstood as the murderer of the important minister and was hunted down and killed. Although Zhaixing finds out the real culprit, her brother Ma Jun makes wolf boy misunderstood that Zhaixing has betrayed him, and then falls off the cliff and disappears. The King of Yang, Chu Kui, who was passing through this place, saw the wolf boy’s extraordinary talent and secretly took him as his adopted son, and later made him the Prince Bo.

Eight years later, after experiencing the tragedy of the Ma family, Zhaixing and Prince Bo accidentally reunite. Zhaixing suspects that Prince Bo is Wolf Boy, but Prince Bo denies it because he does not want to face the painful past. In order to use Ma Zhaixing and the Ma family army to fight against the kingdom Jin, Chu Kui gives a marriage to Prince Bo and Zhaixing, and even makes Zhaixing mistakenly believe that her father-killing enemy is the King Jin.

During their time together, the gentle nature of Zhaixing awakens the love of Prince Bo. When Prince Bo found out the truth about the chase eight years ago and learned that Zhaixing had never abandoned him, the love he had been suppressing broke through the pretense and Prince Bo finally admitted that he was Wolf Boy, and Zhaixing cleared up the misunderstanding on Wolf Hunting Mountain and settled their love with a kiss.

In the end, through many trials and tribulations, with the help of the righteous men, Ji Chong and Bao Na, Zhaixing finds out that the mastermind of the Ma family tragedy is none other than Chu Kui, so all of them work together to overthrow the tyranny of Yang. However, Zhaixing was seriously wounded while retreating from the enemy, and a fragrant soul passed away. Prince Bo did not choose to live alone, but also chose to go with her.